When it comes to sales, marketing agencies are at least 20 years behind the most cutting-edge industries. According to a Hubspot survey, 44 percent of agencies don’t use a CRM, 42 percent haven’t defined their ideal client, and 90 percent describe referrals and word of mouth as their main source for new business.

It’s understandable. Historically, agencies were helmed by creatives. In the agency of record era, a competent shop could forge relationships, win several lucrative accounts, and keep them for decades. Ambitious sales activity was often seen as unnecessary or even distasteful.

Agencies would do well to heed Peter Thiel’s advice: “Look around. If you don’t see any salespeople, you’re the salesperson.”

Thiel was speaking to startup founders, but it’s just as applicable to agency owners, or anyone else in a sales position who might not know they are.

Okay, so what are we supposed to do about it? Below are seven lessons that will help get you started.

If you know your history, you might know that The House of Medici was an Italian banking family who rose to prominence in the 15th century and created a humanist environment that empowered numerous Renaissance artists and helped them flourish. There was a dash of skullduggery along the way, but if you can factor that out and build a culture that personifies being a patron to your artists, you’ll be in good shape.

However, there’s a twist here. Instead of being a creative organization that’s supported by salespeople, focus on being a sales organization that supports creative work. With this approach, you’ll generate a luxurious supply of oxygen that flows into your agency’s creative brain, and you’ll get to work with the clients you choose instead of the other way around. Adopting The Medici Mindset will give you abundance and will bring your agency to new heights.

Tangibly, this means prioritizing and aggressively pursuing new business. No more reactive mode, or relegating sales campaigns to slow periods and downswings. No more thinking of sales as a necessary evil. All of the clever sales tactics, SaaS products, and online blueprints won’t do you any good if you haven’t won the mental battle by committing to a focused effort to dramatically improve revenue.

Let’s assume you’re on board. It’s time to pound the pavement. You go hunting at trade shows. You collect leads from white paper downloads on your website. You do research. Now you’ve got a long messy list of prospects.

What do you do? How do you decide which prospect to exert your limited energy and creative thinking for? And how do you build a sales process that runs without you being directly involved?

Your first impulse might be to build a totalitarian sales automation system, like the systems being sold to you by numerous tech companies. The problem is that if you built your agency on referrals, and you have little historic data on close rates or lead ROI, you’re building a house without surveying the foundation.

If you want to make $1M this year through 10 new clients at $100k per year, it’s a reasonable guess that you will need to speak to 10 qualified prospects to close one, or 100 total per year, or around nine per month, or two per week. What must you do to get two qualified appointments per week? Chances are you won’t need to use every marketing channel under the sun, nor will you need a NASA-level automation system.

If nothing else, keep track of two metrics:

Qualified means you’re speaking to a company that can afford to pay your fees and generally fits your criteria. That’s it. Avoid the semantic weeds of “sales-qualified,” “marketing qualified,” and other jargon for now. Your close rate may be lower than you’re used to, but that’s what it takes to build a new business channel that scales under your control.

Think of Your Sales as a Continuum

There are many effective sales processes out there, and regardless of the one you adopt, build your pipeline as a continuum, not a finite story.

Here’s a sample of a Continuum-Based Pipeline:

Regardless of how you choose to lay out your data, all prospects and clients should be visually represented in front of your eyes at all times, even if you’re not actively focusing on a particular group at that time. Some CRMs encourage you to compartmentalize groups, which creates an out of sight, out of mind effect—and that’s something to avoid.

Walk Before You Run When it Comes to Automation

How do you manage all your data without pulling your hair out?

As demonstrated by Brian Christian and Tom Griffiths in Algorithms to Live By, the only thing worse than having to hunt for a piece of information is categorizing and organizing data that will rarely be searched for or digested.

Start by drastically limiting the amount of data you have to maintain and homing in on the information you know you need. You might start with company name, pipeline stage, source, and basic notes. Here’s an example— 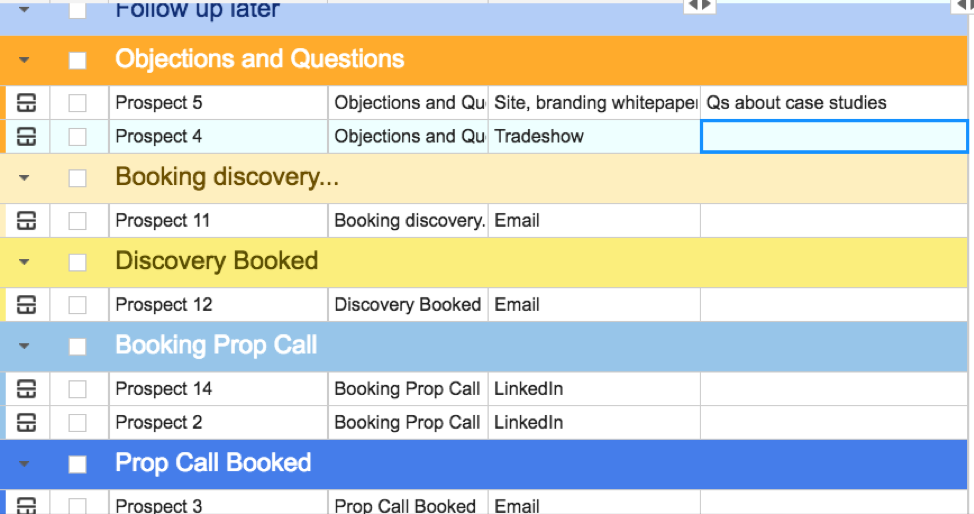 From there, if you want to get fancier by adding in the prospect’s company size, industry, and other details, of course you can do that, but it’s more efficient to wait until you have a specific use case for applying that information, like running an email campaign to a particular group.

Instead of trying to build your totalitarian sales system, be okay with a small amount of manual data entry, just as long as it’s governed by a consistent process.

For example, every Monday morning at Sales Schema, our Sales Development Representatives and Executive Assistants go through each and every prospect in the pipeline in order to lock down booked appointments for our clients. Is each prospect logged in the right deal stage? Do we need to follow up and schedule an appointment? Is an additional touch point needed via phone? Overall, is everything running efficiently?

Beyond that, we set priorities ensuring that everyone in the pipeline gets handled in the right order. For example, new prospects, who are more likely to drop off in the face of unresponsiveness, are handled first, while ‘lukewarm’ prospects are handled last.

Automate the Who, What, When and Where, Customize the How

So, you set up a reminder system in your CRM that tells you to send an email and then a phone call to a certain group of prospects at a particular time, but howyou follow up is well worth your team’s creative brain power.

This is where lots of tech-eager salespeople get in trouble. They try to save their time by automating communications that should be customized, and if I’m being honest, we’ve fallen into this trap ourselves. Today’s customers want personalization, and they can see through automation and cookie-cutter messages designed to save a salesperson’s time a mile away. And generally speaking, they don’t like it.

At the end of the day, I’d rather use a paper Rolodex purchased at an antique store in conjunction with an ironclad process over a cutting-edge CRM with a shoddy or inconsistent process or a process that relies too much on automation and takes the human factor out of the equation

But who manages all of this?  How do you and your team find enough hours in the day?

The answer, of course, is hiring people, or at least planning out the roles in advance.

Here is an email I received recently from an agency owner, and it encapsulates the Special Snowflake Fallacy (bolding is mine).

…To be honest, I’ve tried using a biz dev person three times in the past 15 years with little or no success. I don’t mean that we get leads and lose the business—we just don’t get any MEANINFUL leads [sic]. In my experience no one has the ability to understand my simple business model and convey that in outreach pitches. I end up doing so much work that it’s easier to do it myself.

I get it. Hiring and training is hard in general, and it’s even harder to hire for sales, which is a specialized Jiu Jitsu that’s spawned its very own cottage industry. At the same time, buying into The Special Snowflake Fallacy will be your downfall. An entire market comprising thousands of successful service businesses scaled throughout decades by hiring and training salespeople. Why would your agency be the exception? You really don’t have to do it all—nor should you.

The other common problem, which I get hints of in the above example, is The Go Get Em’ Tiger Approach. This is where owners are basically lazy. They hire salespeople, tell them a bit about their business, and send them out into the cold. They give them few if any leads, and little nurturing or support. When the salesperson inevitably fails or jumps at a better opportunity, the owner casts blame in every direction but his own.

Your salespeople need to be supported just like your creatives do. In some instances, this requires learning entirely new market verticals, buyer personas, and agency services offered. Success on this front requires a lot of education and nurturing, so expect that right up front. It also requires documenting your sales process, practicing it with your new hires, conducting it in tandem with them, getting them to run on their own, and finally asking them to cement the knowledge by teaching the process to someone else (credit to John Logar for articulating this training approach). If you don’t yet have a teachable process (or even if you do) consider professional sales coaching.

Wrapping It Up—Planning for Your Sales Team

In a perfect world, you sales team will emulate best practices. You’ll have Business Development Reps (BDRs) working in tandem with Executive Assistants to lock down discovery calls with ideal prospects. After the discovery call, your prospects will be siphoned to your higher-level Account Executives who will present your services. Onwards from there, your creatives and strategists might join in to write and present proposals. Altogether, building and maintaining this team is a six-figure feat, plus at least six months of training and ramp up.

If you don’t have the resources to build your sales armada, what do you do instead?

First create lead flow by learning how to do it yourself or hiring a company or a consultant or coach who can help. Next, as you can afford it, hire from the bottom up to manage the less-creative aspects of this process.

From there, assuming you have lead flow to provide to new salespeople, you can start hiring and training BDRs to handle discovery calls and later proposal calls, the latter with your team’s collaboration. Your BDRs, assuming you’re providing enough at-bats, should be given the potential to make at least six-figures, encompassing base salary plus commission. If you’re not there yet, improve your lead flow and fulfillment capabilities. While technology and automation can be valuable, hiring and training is perhaps your biggest point of leverage.

About the Author: Dan Englander 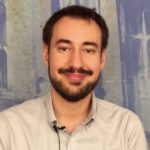 Dan founded Sales Schema in 2014 to help marketing service companies reach new heights by aggressively focusing on new business. Previously he was the first employee business development lead at IdeaRocket, and before that, Account Coordinator at DXagency. He's the author of Mastering Account Management and The B2B Sales Blueprint. In his spare time he enjoys developing new and exciting aches and pains via Brazilian Jiu-Jitsu.

We use cookies to ensure that we give you the best experience on our website. If you continue to use this site we will assume that you are happy with it.OkPrivacy policy