Should you change beliefs or behavior?

It didn’t, obviously. But that didn’t seem to matter much to the people who believed it would. Remember that. It’s important, especially if you want to change people’s opinions or behavior.

Looking back at 1954, though, you might not be surprised that some folks thought we were facing our end here on Planet Earth. While the year began with the happy news of Marilyn Monroe marrying Joe DiMaggio, there were plenty of not-so-happy things that followed. The Hydrogen bomb test in the Bikini Atoll. The McCarthy hearings, which inflamed the Communist “Red Scare.” The introduction of the “domino theory” that suggested that any Communism we let pass would lead to Communists taking over (and the end of the Capitalist world as we knew it). The seeds of the Vietnam War. There were even appearances from outer space, in the form of a meteor crashing through a house.

But Dorothy Martin of Oak Park, Illinois, got something else from outer space. Her outer space-based sources told her in no uncertain terms that the world was going to end on December 21, 1954. Before the world flooded that night, a flying saucer was going to come and pick them up from Martin’s home altar (also known as her sun porch). She believed. So did her followers. They sold their homes and gave away their possessions.

That night, the minutes ticked by.

What did Martin and her believers do?

The rational answer would be that they realized they were wrong, and in varying levels of sheepishness, admitted it and went on to rebuild their lives. Right? I mean, that’s what rational people would do, isn’t it? Admit they were wrong and move on?

Yeah. That’s not what happened. No, instead, Martin and her followers doubled down. They took the non-appearance of the flying saucer as an indicator of their success in getting the end-of-the-world-word out. In fact, the outer space sources gave them a new mission: spread the word.

If you’re a fan of psychology (or, um, of Doomsday cults?), you know this story well, of course. It’s the story that psychologist Leon Festinger and his colleagues published in their seminal work When Prophecy Fails. It gave rise to Festinger’s theory of cognitive dissonance, which, frankly, explains a lot about human behavior. Cognitive dissonance is what happens when we have “inconsistent thoughts, beliefs, or attitudes, especially as relating to behavioral decisions and attitude change.” In other words, when things we want, believe, and do are in opposition to each other or to what we see in the world. That inconsistency, that gap, is incredibly painful, both psychologically and emotionally.

So, as Festinger observed, when that inconsistency happens, we’ll do a LOT, mentally, to close that gap and relieve the pain. That’s why, when faced with incontrovertible evidence that the world didn’t end, Martin and her followers didn’t change their beliefs. They reinterpreted the non-event. They rationalized what happened to suit those beliefs.

You know this intuitively of course. It’s why we so often focus on amping up the “stakes” or the consequences of not changing. To focus on the problem your client or customer is facing so that they’ll be more open to your solution. In the Challenger sales methodology, in fact, you’re told to make the “pain of the status quo exceed the pain change.” To engage the “emotional decision centers of the brain,” you’re told to widen the gaps in someone’s beliefs in the hopes that they’ll suddenly realize they’ve been wrong all along and adopt a new belief.

Yeah. But that’s not what happens. At least, not in the long-term. Sure, you may drive an action by leveraging pain. But pain is the enemy of long-term change. If something is painful, you won’t continue to do it, especially if it goes against your long-standing beliefs. And neither will your customers. They’ll regret the action long before they’ll retract their belief.

I mean, have you ever heard of “believer’s remorse?” No. But you know “buyer’s remorse” is real. It’s why people get fired up in your presentation… and then don’t follow up. It’s why, even if they hire you out of fear of what might happen otherwise, they’ll often keep trying to discount you and your work afterward. You may have even felt it yourself.

All of this is why I think we – and particularly the marketers and sales folks among us – have it unintentionally backward whenever we use pain as our lever for change. It’s unintentional because using pain as the core of our messages really does work. In the short term. But, if you really want long-term change, your job is to remove pain from the decision, not induce it.

This piece was a contribution to the Agency Management Institute blog from Tamsen Weber, motivational speaker and creator of The Red Thread.

About the Author: Tamsen Webster 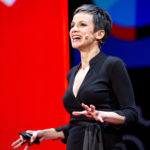 As a professional "Idea Whisperer," Tamsen helps people find, build, and tell the stories of their ideas. She combined 20 years in brand and message strategy with four years as a TEDx Executive Producer to create The Red Thread®, a simple way to change how people see...and what they do as a result. (Though as she'll tell you, everything she knows about people, speaking, and change, she learned at Weight Watchers.) Today, Tamsen is a globe-hopping keynote speaker who consults with enterprise companies like Verizon, Johnson & Johnson, and State Street Bank on how to get their big ideas to have the impact they deserve.