Who should be your agency’s voice? 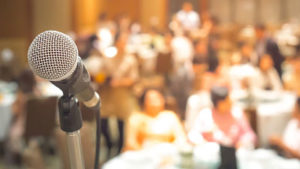 If you’ve heard me say it once, you’ve heard me say it 1,000 times — it’s tough to be a generalist out there. In simple terms, it means your competition is everyone from the 16-year-old kid who builds websites, to every freelancer, to 99 designs, to every other agency within your prospect’s knowledge base. I am a firm believer in positioning your agency (see solocast #190 — positioning your agency) and then leaning heavily into those niches.

When you have a depth of knowledge in a particular space (industry vertical, audience or problem you solve, or in rare cases — a specialty offering like crisis communications) you can begin to build an authority position. Key to claiming that position of authority is creating content that demonstrates your expertise by teaching your audience what you know. (More on all of that in later newsletters! — You can subscribe here)

But who should be that voice of authority? Many agency owners see that ask as “do I really have to be the one who writes all of the blog posts and finds all of the podcast guests?” or whatever your creation demand is based on the channels you want to build out. That’s not what I’m talking about. Who should be the voice/face of your authority position is not the same question as who should create all the content. But let’s put a pin in that for now.

If you are like some agency owners, the idea of being in the spotlight (literally or metaphorically) is pretty unappealing. And you’d like to have one or all of your employees step up into that role. Not an awesome idea. Why? Because like the Coca-Cola logo or PMS red — if you do it well, your authority position is going to be worth millions. That’s not hyperbole — it really will be worth millions over the long haul. So let’s assume you allow your #2 to be the voice of your podcast or the one who does the speaking gigs. And that #2 gains some notoriety and narrowly focused fame as a subject matter expert. You know what’s coming next. Unless you have a Wonder Woman strength level lasso around them — they will get offers and sooner or later, they will walk.

I can hear you arguing with me. But it’s:

There are a FEW noted exceptions but for the most part — you should not make someone a superstar unless it is you or someone else who owns part of the agency. And it has to be real ownership where they see the books, get distributions, etc.

I’ll get into creating the content in a future newsletter, but my point for now is this: You can make biz dev so much easier, faster and less expensive if you carve out a position of authority for your agency. Your agency can absolutely be known as the fill in the blank (i.e. pharma for women over 35, multicultural or dark horse brand) agency. But behind that agency needs to be a resident expert and that should be the owner.

You’re the only one who has a 100% guarantee that you will not leave or be fired…and you have the gravitas, years of experience, and presence to pull it off.

And I promise, it’s nowhere near as scary, time-consuming or difficult as you might think.